The Jet Propulsion Laboratory (JPL) was established by the California Institute of Technology in the 1930s.  America's first satellite, Explorer 1, which was launched in 1958, was created at JPL. Since then, JPL has sent the first robotic craft to the moon and across the solar system, examining the planets.  Today, in total, JPL has 20 spacecrafts and nine instruments conducting active missions.  All of these are part of NASA's program of exploration of Earth and space with plans to send robots and humans to explore the Moon, Mars and beyond.  Today’s Outlook sat down with Dr. Charles Elachi, director of the Jet Propulsion Laboratory, to discuss the exciting new breakthroughs taking place.

Dr. Charles Elachi was born in Lebanon to Rokos and Yvonne Elachi.  He attended the Collège des Apôtres in Jounieh, and later the Ecole Orientale in Zahlé.  At the age of 17, the young Elachi moved to France, where he earned a Bachelor of Science in physics from the University of Grenoble, and an engineering degree from Grenoble’s Ecole Polytechnique.  Elachi then moved to the United States, where he continued his distinguished student career, receiving his Master of Science and Doctorate in electrical sciences from the California Institute of Technology in Pasadena, and later earned another Master’s degree in business administration from the University of Southern California, and yet another in geology from the University of California, Los Angeles.
Dr. Elachi joined JPL in 1970, and since then, he continued to steadily climb the ladder of success, becoming director in 2001.  Today, in addition to leading JPL as one of the world’s premier organizations in planetary exploration, Elachi is also vice president of the California Institute of Technology (Caltech), where he is professor of electrical engineering and planetary science. 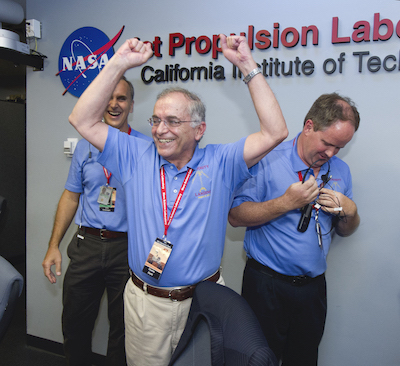 At the Jet Propulsion Laboratory control room after the landing of Curiosity on Mars July 2012.

How will the knowledge that water did in fact exist on Mars affect life here on Earth?
I think one of the key objectives of our current research is to understand how other planets could have life evolve on them, particularly Mars because it’s the closest to us.  What we discovered with the rovers, by looking at the geology of Mars, is that about two billion years ago, there were oceans on Mars similar to those on Earth and two billion years ago is when life started on Earth in the ocean – so the key question that we are asking is: Why is it different?  If at the same time there were oceans on Mars and oceans on Earth and life started here, could life have started on Mars?  And why didn’t it evolve in the way that it did on Earth? We know today that there are no people like you and me on Mars, but could it be that there were little cells or that life started and then stopped, or perhaps it simply didn’t start at all? So the key fundamental question is: Why did life evolve on our planet but not on Mars? This is the question we are trying to answer so we are sending the next rover, which we are currently building at JPL and planning to launch in 2011. This is a rover that will have chemical labs in it thus enabling us to take samples from the rocks and ground. We will grind these samples, put them in ovens, heat them and then see what chemicals they are composed of. The key thing we are looking for is any chains of carbon because life evolves by starting with organic molecules, then they build chains of carbon, then they build DNA and then they form cells.  So we are trying to determine the level at which evolution on Mars ceased.

Dr. Charles Elachi in front of the Rover Mars explorer.

The landing of Spirit and Opportunity on Mars in 2005 was quite an achievement.  What major projects should we expect in the near future?
In the very immediate future, we are launching a spacecraft which is a telescope looking at the stars and doing infrared mapping.  In October of 2011, a rover called Curiosity will be launched and should arrive on Mars in July of 2012.  It’s a very large rover which can drive tens of kilometers and spend many years working on Mars; this is probably the most exciting project we are working on!  We also have missions to look at the stars that are near to us and observe the similarity of the planets next to them with our planet. This is a very challenging task because it does not entail any traveling to the planets, but rather building very large telescopes which will allow us to take pictures of the other planets.


What do you enjoy the most about your current position?
The most exciting thing about what I do is that every day we are exploring.  I look forward to going to work because I know that I will learn something new and this is what I find the most exciting.


How do you keep the 5000 staff members at JPL motivated considering all the stress and pressure they have to deal with?
People who work at JPL are very passionate people who love the challenge and excitement of the work we do, and of making new discoveries.  Our staff includes some of the best scientists and engineers, and we even have an artist whom we call the Artist In Residence.  I think that because of the nature of our work, and all of the exploring and discovering that we do on a daily basis, the element of excitement is always alive and this alone motivates the staff.
People don’t come into work for eight hours a day; they come in and work for as long as it takes to get the job done.  It’s hard work but when we watch the landing, just those five minutes, the feeling is so exhilarating and thrilling and the rush of adrenalin so pronounced that it makes up for the five to six years that we put in just to get to that point.


How do you personally cope with job-related stress?
I am accustomed to it.  I think the important thing in our business is to stay very calm because problems arise all the time so you have to expect these things and deal with them. I love the outdoors; my wife Valerie and I do a lot of camping and a lot of skiing which is our way of relaxing.


How do you strike the right balance between family and work?
I work hard and I play hard.  So when Valerie and I are on vacation, we are on vacation! Our daughters, Joanna and Lauren, are grown up now so they don’t live at home but we used to travel a lot together, we’ve been to some 30 or 40 countries together.  In fact, my wife and I and our youngest daughter just came back from a trip to Argentina and across the Andes to Chile. We like to take a lot of adventurous trips.


After such exciting trips is it hard to go back to work?
No, it’s always exciting to go back to work!  People ask me if I would like to travel to Mars and I say ‘No, I’ll send a robot’.  I like to stay here because our planet is a very beautiful place, particularly Lebanon. There are lots of beautiful places to visit like the Cedars.  So, just as I explore and discover at work, I like to explore and discover in my free time too.


What are you most proud of and what do you regret in your long experience with JPL?
First of all, I don’t regret anything.  If I had to do it over, I would do it all the same way.  What I am most proud of is my family.  I have two lovely daughters and they are doing really well. I’m just excited about everything and I keep telling people, no matter what you do, if you work in a magazine or if you are an artist, enjoying what you are doing is the most important thing.  Being excited about what you are doing and learning something new every day is what life is all about.


When you were at school studying, is this what you thought you’d be doing? Was this your dream all along?
To be honest with you, no. But, I loved science and I was very excited about learning and I worked hard.  You have to set goals and work hard to achieve them, and though the odds of your goals being realized are against you, if you don’t try, your chances will be zero; you will never get anywhere.  The key thing is to always push yourself to reach new levels, do your best and enjoy what you are doing.


What do you consider to be your strengths and weaknesses?
My strengths are both my technical capabilities and my ability to inspire young people who work at JPL.  People ask me what the most important thing about my job as Director is, and I tell them that my job as a leader of 5,000 people is to give them a vision, inspire them about the vision, hire the best people to achieve that vision and then get out of the way.  It’s really all about the people who work for you, because the role of a leader is not to give orders, I don’t do that; the role of a leader is to inspire people so that they feel that they are part of an exploration team and I believe that part of my strength is that I articulate that very well and they also see that I am excited about what we are doing.  My job is also to protect the people who work with me because in this business we take a lot of risks, and I basically tell them: If there is a success, you are going to be in the front row, and if you fail, I will be in the front row to protect you.  As for my weaknesses, I don’t know, I suppose I like nice-looking women – I have a beautiful wife and two beautiful daughters!


What are your hobbies?
I have three hobbies.  I love skiing, which is a sport I’ve been enjoying since I was in college.  Valerie and I do a lot of downhill and cross-country skiing.  We both like nature and the outdoors a lot so we do a lot of camping and hiking, even in the snow!  And, finally, my biggest hobby is reading historic books; I love to read books about history.

Sign Up to Our Newsletter To stay Updated on the Latest Celebrity Style, Fashion, Beauty Tips, Travel Getaways, Success Stories and more…